View cart “Industrial Overlord” has been added to your cart.
Checkout View Cart
Please checkout within or this item will be removed from your cart. 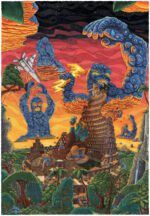 Only 1 left in stock

The tower of Babylon occupies the center of the picture. This is the biblical story of how God gave humans different languages and therefore could not cooperate. Christianity is only one of many belief systems on planet earth, but a religion, in general, can create division between people which in turn makes us unable to cooperate. In nature, on the other hand, cooperation is natural, even between species.

Ravens and wolves cooperate by the ravens’ ability to spot prey from high up in the sky. The raven dives down and marks the prey. The wolf then in turn kills the prey, before they share the meal. There are many other examples of cooperation between species, like Zebras and Ostriches where the Zebra has good vision and bad hearing, while the Ostrich has good hearing and bad vision. Together they are better equipped to discover hungry predators. There are also trees that cooperate with ants, the tree lets the ants live inside the tree, in return the ants’ attack intruders who feed on the tree. The tree sends out sent signals about the whereabouts of the intruders and the ants’ attack.

About 650 million years ago, there were only single-celled organisms like bacteria on planet earth. One day a small bacteria penetrated a larger cell and started to eat the waste material of the bigger cell. The small bacterias own waste was nutritious for the bigger cell, this way the cell gained more energy and started to divide. This is how multiple-celled organisms started to evolve. In each cell in all living creatures on earth today, we find this small bacteria called the Mitochondria bacteria. This is the cells power plant and without this, humans would not exist today. Cooperation is therefore key to life on earth.

To underline that gods are made by man and the other way around, you find seven gods performing the seven deadly sins on the tower of Babylon. They all originate from a time before Christ, but they all have a similar story as Jesus. Buddha, Krishna, and Horus are all among the sinners. Especially Horus has an identical story as Jesus. He was born by a virgin mother, the three wise men came to visit, he healed the sick, was crucified with two bandits, was resurrected on the third day, before he went up to heaven after forty days. This implies that the story of Jesus is plagiarized, told throughout centuries. There are theories that state that the story is describing the sun’s path over the sky, past the twelve-star constellations which the Babylonians invented six thousand years ago.

Jesus himself is visible on top of the crumbling tower. He represents the explanation of how religion occurred. First and foremost he is scared of death. This is the foundation of all religions. The fear of death is great and man has always fantasized about life after death. At the same time, we have a profound wish to see our loved ones again on the other side.

Jesus clutches a teddy bear, which represents two things. The first is that almost all religious people have got their beliefs from their childhood. Their parents have told them stories of the bible and other holy scriptures, and they have in turn believed them. Childhood faith sticks with them through life, especially if people they trust have the same beliefs.

The teddy bear also represents a personification of an object. When you are a child it is easy to get attached to a teddy bear or a doll. You give the object a personality and reveal your deepest secrets to this object. It can be hard to detach yourself from the object later in life because of the emotions invested in the relationship. The object can still be perceived as a living thing and therefore hard to get rid of. Similarly, people create a personification of God. Even though God is an abstract term only exciting in the collective conciseness of humans, people will attach a personality to this fictive person, and create a strong bond to him. Like the teddy bear, it is hard to let go of the attachment, even as an adult.

There is an experiment which you can do on pigeons called «Pigeon superstition». The experiment consists of putting a pigeon alone in a box, feeding it through a computer at random times. The pigeon will evolve a pattern which it thinks is the reason it receives food. What the pigeon did the first time it received food, will determine the pattern. The pigeon will repeat the pattern expecting more food. One example can be turned 360 degrees to the left, jumping and then a 360 degree turn the right, ending with flapping the wings. This experiment underlines how natural it is for living creatures to look for patterns in nature. Similarly, humans have evolved their religions, ceremonies, and rituals throughout time. Humans have seen a connection between their actions and events occurring in nature and society.

Today we bomb the old Babylonian empire to shreds, while Norwegian companies get rich on war material. We humans must look past our differences like language and religion to realize that we are all better at cooperating with each other. We all originate from the same cells that once floated around the ocean, seeking nutrition from the sun.