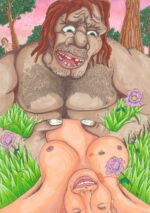 Almost all humans has some genes from erlier hominids. Only some africans is 100% Homo sapiens sapiens. This showes that our ancestors mated with other species of hominids when they wondered out of Africa about sixty thousand years ago. The hominids they met had also wondered out of Africa, between two million and five hundred thousand years ago, starting with Homo erectus.

Here we see a Neanderthal enjoying a female Homo Sapiens. She looks like enjoys herself as well. In the backround we can spot a jealous Homo sapiens, hoping to be next.