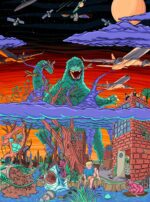 If humans continue to neglect the warning signs from the scientists, we might end up with a totally different planet, not far from the one depicted in this picture. By dumping toxic and radioactive waste in our fragile nature, mutations may accrue, which in the worst-case scenario will change our hole environment.

In this fictional dystopia of the future, we have made a giant Godzilla, mutated from the old DNA of an extinct dinosaur. It has risen from the depths of the sea to take revenge on the destructive spices we call man. Then our top modern fighter jets and warships will not stand a chance. Nor the Atomic bombs will not do the trick, as it eats them for breakfast.

The life of the average factory worker will be hard and monotonous. There will not only be the poor of the third world countries that have to work themself to death, to keep the wheels of capitalism turning. Even here in the west, most men and women have to slave for the men in charge. The air they breathe and the food they eat will be full of toxins and cancer will be as a command as a cold is today. Life expectancy will drop and hopeful eyes will be hard to spot.

Only the rich and powerful will be able to breathe fresh air, high above the toxic clouds. There they can continue their lavish party and drink expansive champagne until they pass out. But the monster from the deep is taller than the tallest skyscraper, so no one is safe. The obese factory owners will serve nicely as appetizers, as they are full of grease and oil.