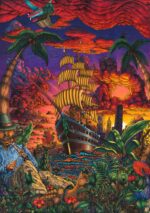 The first anti-drug legislation in the United States is an indirect result of the opium wars of the mid-1800s. The British had gone to war with China because they were in a trade deficit with the country and needed a commodity to sell to the Chinese. Opium was chosen, which they extracted from their colonies in India. The Chinese emperor, on the other hand, did not want the population to become addicted to the drug and forbade the British to sell it. Thus, the British went to war and the British Navy crushed the Chinese army and was thus able to set about making millions of Chinese dependent on the plant extract.

In 1880, the American railroad was completed, which was largely built by the Chinese. The diligent workers were seen as a threat to American workers and a smear campaign was launched. It focused on smoking opium in so-called opium dens. The campaign worked and a beautiful day in May, two years later, the Chinese Exclusion Act was signed by President Chester A. Arthur. It made it illegal for Chinese, with few exceptions, to emigrate to the states. 27 years later, after further propaganda, the first legislation against a narcotic drug was signed in the United States. The law was called the Smoking Opium Exclusion Act and made it illegal to import and inhale the drug. Taking the drug as a pill or with a syringe was still perfectly legal and widespread among the white population.

The story continues in the work “Substance city”

There are no reviews yet.